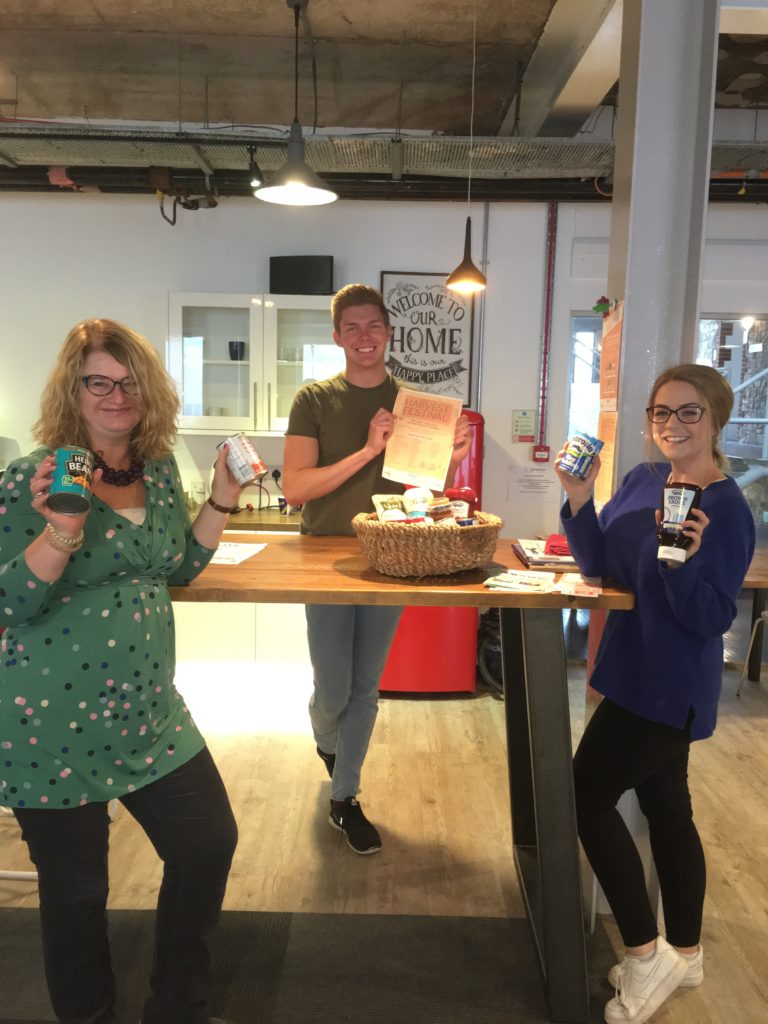 As the leaves start to turn brown and the temperature plummets, Aquamarine is doing its bit to help out the less fortunate in the local community. Aquamarine is holding a harvest festival to raise donations for Exeter Foodbank and St Petrock’s to help people in crisis. We are raising money by holding a ‘Bake-off’ bake sale and collecting food donations in our shared office space, Generator Hub, which anyone is welcome to get involved with!

Our Content Executive, Adrienne, who is running the festival, decided to go out and talk to the people behind the charities to find out more about what actually happens in a Foodbank and a homeless shelter and to see where our donations will be going… 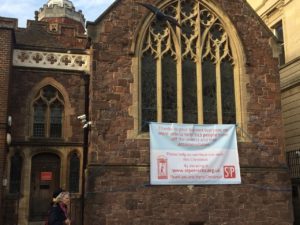 The charity, St Petrock’s, is located inside a converted church (named St Petrock’s) however Gill Luckings, the External Communications manager, insists, “we’re not a religious organisation, we’re a humanitarian organisation”.

In a room, away from the hustle and bustle of the shelter, Gill tells me about the origins of the charity…

“We started 23 years ago now, because then people were worried about the visible street homeless, and they wanted to do something to help”.

She recounts how a group of people in the city used to hand out soup and sleeping bags from Palace gate, in the heart of Exeter’s city centre…

“They had a place there they would open in the evenings and hand stuff out but they quickly realized that hot drinks and stuff can keep people alive but there’s a lot more that needs to be done that wasn’t being done. The services that they wanted to provide weren’t available in Exeter at all”.

However, Exeter’s homeless needed more than food and a place to sleep, Gill said…

“They need help, they need support, they need encouragement, they need advice. They needed health problems to be addressed”

“We have what we call our emergency survival services which is the food, showers, the laundry, the giving out of clothing, sleeping bags, and collecting post because if you’re homeless you have no address, so we’re an address for them”.

As well as this range of services, the St Petrock’s team are made up of “councillors and social workers who work one to one with clients” says Gill, “because there are various reasons how people become homeless”.

Although homelessness can happen to anyone, Gill explains that the most vulnerable are, “those who experience poverty as a child, people who have had an institutionalised history, whether it’s in care or in prison, people with mental health issues, addiction issues”.

As one of the greatest risk factors, Gill said, “poverty is a number one, a child born in poverty is far more likely to experience future homelessness than one who isn’t”.

Gill explains, “If you have a family where you’ve been nurtured, you’ve learnt key life skills, earnt an education, you’ve got a work record, you have friends, colleagues, and supporting networks, the gap when you’re homeless is relatively short”

Those on the streets who have never had a job, and don’t have reliable families or friends are far more entrenched in homelessness, and commonly have complex needs.

“People lose so much self-esteem when they’re on the streets. You’re seen by everyone as being some other population, and they’re not, they’re individuals, they’re just like everybody else, and they have lives” said Gill.

The homeless shelter takes on people with low support needs, to which Gill adds that they are quite high “but we feel comfortable with what we can manage”. Those with drug or alcohol addiction and mental health issues are referred to a city hostel which provides 24-hour support.

One of St Petrock’s most successful ventures is their Private Rent & Support service which advances referencing fees and deposits to individuals it feels are most able to manage a tenancy.  This team works with people with low/medium support needs to accommodate them in private rented accommodation and provides on-going support to both the landlord and the tenant. Those individuals who are homeless with drug/alcohol addiction and mental health issues are referred to a city hostel which provides 24-hour support as their needs are more complex.

Gill said, “We set this service up a few years ago and we now have 180 people accommodated in this way. It’s been very successful in sustaining tenancies for people who have even had years of rough sleeping”.

She states that a lot of the time the rent is too high to place them in accommodation in Exeter, so they are instead offered properties in the surrounding seaside towns.

Unfortunately, homelessness in the city continues to rise. Gill tells me “we see around 50 – 60 people a day and that’s double what we saw when I first started 9 years ago”.

Gill states, “It isn’t because people want to be there. Zero-hour contracts, the gig economy people are working on breadlines, part time jobs, poor pay,  are just some of the factors that can lead to people finding themselves at risk of homelessness”

Fortunately out of the 304 individuals who accessed St Petrock’s last year, over 160 were supported into accommodation and an additional 75 individuals were still receiving support.

At Exeter Foodbank 100 people a week on average are given food packages to last them for three days, this includes enough for breakfast, lunch and dinner for each person in the household. These people are referred by agencies to receive vouchers that entitle them to a package.

Since 2010, the number of people receiving food from the Trussell trust (the Foodbank organisation) has rapidly grown year on year, and continues to rise.

Most worryingly is that an increase in families have been struggling with rises in the cost of living and stagnating wages. I had a chat with Mark Richardson, Manager of the Exeter Foodbank who told me…

“More and more we’re seeing it’s families where parents are working but the income is so low that they can’t afford to pay their rent, their council tax, and their water bill, food is the thing that they just cannot afford”.

The common 'Jeremy Kyle' stereotypes of Foodbank recipients aren’t always true, as I found that ‘normal’ hardworking people, just like you and I, are some of the worst hit.

“If you imagine a classroom at school you have the people at the top of the class who have no problems so the teacher doesn’t have to do much for them because they’re fine. Then you have some people who are at the other end of the class and they always seem to struggle along, and they always seem to get the necessary help and support. But in the middle of that classroom you get a whole load of people who just do alright most of the time. When they do they need help, as with a lot of our clients, it’s almost as if they don’t know where to ask for it because they’re not used to having to go for help”.

Rather than people who have been ‘in the system’ the Foodbank is receiving more people that have jobs but suddenly face financial problems.

Mark explained to me that the problem is that these are the ones who fall through the gaps. However, people can’t just walk off the street and get a food package…

“They have to come through another agency, so we have 130 agencies plus who help and refer to us in Exeter who are anything from schools to churches, citizens advice, doctor’s surgeries, youth clubs, children centres…” said Mark.

The Foodbank also has ties with every school in Exeter and they give vouchers to parents who may not be able to afford food during the school holidays. Mark gravely stated, “There is definitely an uptake in the holidays now and I think that’s increasing”.

When asked about Jacob Rees-Mogg’s recent statements on Foodbanks being ‘heartwarming’ and that usage has gone up due to awareness, Mark outlined that he did not agree with the comments.

Despite this, he can somewhat understand how a Foodbank can be heartwarming, saying…

“If you are at a foodbank distribution and you see the kindness and the hospitality of the volunteers who are all there to try and help their neighbours and friends in need, and if you see the appreciation from the clients, there is something absolutely amazing about that atmosphere”

Both Exeter-based charities face many similar difficulties and situations, a common theme recently has been the roll out of Universal Credit.

Even though it hasn’t rolled out in Exeter yet, Gill said:

“We’ve had to find funding for a specialist welfare advisor because so many clients have so many problems and it takes so long to sort out”.

At the Foodbank, Mark told me that some Foodbanks in cities where it has launched have had to close because they’ve been unable to cope with the demand. Mark said, “From the areas where universal credit has started huge percentages of people are going to Foodbanks, it’s going up by 35%”.

How You Can Help

If you would like to raise money for the less fortunate of Exeter, drop off donations (donation list below) at our shared office space in Generator Quay, and get involved with our harvest themed ‘Bake-off’ bake sale (all donations go to the charities) to see if you will be crowned a baking legend!

Please note that shop bought cakes will not be entered into the judging process but can be put up for sale. 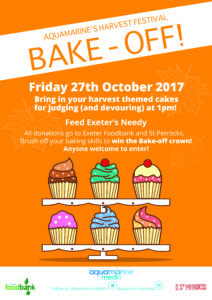 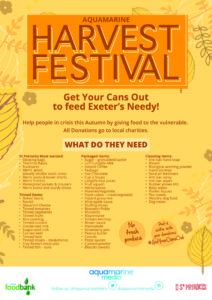