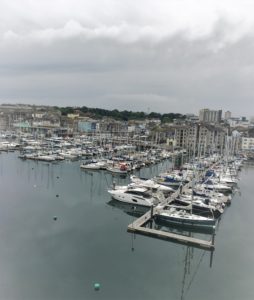 Yesterday our PPC Account Executive, Scott and Content Executive, Adrienne, went along to the Devon Chamber of Commerce’s event at the Regus offices in Plymouth. The venue boasted fantastic views of Sutton Harbour, and we were treated to tasty cream tea refreshments and even a tour of the offices.

After a spot of networking with local professionals, George Cowley from the Devon Chamber gave an impassioned talk about the importance of putting the South West on the economic map. Long thought of as a holiday or retirement destination, George explained that Devon’s economic potential is often dismissed by the big players in business. To combat this, he stated that the way forward to being viewed as an economic powerhouse is by working cohesively with every town and city in Devon.

Another Chamber member, Chris Platt, suggested ways for South-West companies to make waves in the business community by talking with local MPs to get our voices heard on a more national level. With Brexit looming, it was also discussed that UK businesses (particularly in the South West) need to refine their international export links to keep the cogs of trade running smoothly. Although the South West has seen a huge rise in the economy since the Brexit vote, inflation is rising, so companies need to stay vigilant.

The event posed a great opportunity to catch up with all-important business updates and we really enjoyed making connections with local professionals.